The advent of online shopping, smart phones and social media services, such as facebook, has meant that there is a wealth of data about
consumers available to companies. One famous early application of
these ideas was google using search terms to map the  spread of
flu. The analysis of this use amount of data is called: “Big Data”.

The analysis of big data requires a trained work force, so we have introduced a new BSc program called data modelling and analytics

Below are some  posters for the recently introduced MSc Data Science and Business Analytics, developed by  Dr. Julian Stander and Dr. Luciana Dalla Valle. 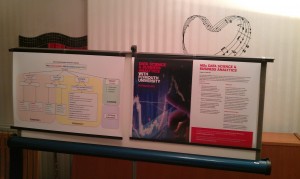 What happens when a piece of research is done and published in a journal, or at least submitted to a preprint server at Cornell? The next step is to tell other people about it, by presenting a talk conference or giving a seminar at another  University.

So on 25/11/2015, Dr Ben King went to Imperial College to a present a seminar with the title: Laser-based strong-field QED. Ben visited the Plasma Physics research group at Imperial College. The abstract of the talk was:

Since the advent of the laser in the early 1960s, quantum electrodynamics (QED) has been used to predict a variety of new phenomena when charged particles interact with intense laser pulses.

Recent progress in high-intensity laser technology has put several of these phenomena in reach of near-future experiments. Unlike the technology, the progress of theory understanding beyond what was calculated by the 1970s has been limited. In this talk, I will outline some of the theory successes of laser-based strong-field QED and discuss the main challenges and potential benefits of solving them.